“At the Boomerang Cafe, where I first met you…..”

Back in 1996 after I’d ventured far from my home in Melbourne. After I’d opened a bar in Cappadocia that so startled the local businesses that there followed months of Jandarma raids, local threats and even gunfire. I’d met a nice young lass from Oz, Kelly Brown. She had made Eceabat her home with her beau. They had a small hotel and ran the notorious Vegemite Bar. I’d made my way there after my tumultuous time in Goreme. T’was time to chill out a bit so I was given the opportunity to help out behind the bar and take travellers out to my favourite place on earth…. Anzac.

Around that time I met a gent named Mesut, he was a fisherman, a diver, an explorer. He had also opened The Boomerang Cafe. As the nights grew colder and visitors were few and far between, we seemed to have a helluva lot in common my old mate Mesut and I. In fact I wore for many years the AUSTRALIA shoulder badge he’d given me around my neck. There were cold nights spent in front of the fire with friends. I remember the first time I ever heard Paul Kelly’s “From St Kilda to Kings Cross” played so well by a visiting troubadour on his guitar. Life was indeed good in the Roachie world.

I have always tried to find an excuse to drop in there for a cold beer, on the ‘honour system’. And when I mention it to the people I’m travelling with, they don’t need much convincing.

With the popularity of day tours from Istanbul meant that the numbers of travellers staying in Eceabat have dwindled greatly. The Boomerang was always popular for those pitching a tent or on overland trucks. Sadly, those days have gone and Eceabat is suffering with empty hotels and guesthouses.

This April, being the centenary of the Anzac landings in Turkey I had more than an opportunity to share this hidden gem.

Given carte blanche control over how I ran my Mat McLachlan Battlefield Tour groups and the great fact that we were staying in Gelibolu and not fighting for space on ferries, meant that my groups did indeed have the time to enjoy a few bevvies and wine with Mesut and his family.

Weather was indeed on our side. Our A101 and A208 tour mosied into the Boomerang one afternoon after much exploring and fighting with the centenary crowds. Mesut had seen very little passing trade and thankfully for us the place was counted as our! The drinks flowed freely and our local guide happy at first was itching at the bit to get back to our hotel where he could consume free Raki on the expensive terrace. But we weren’t to have it! After a couple of hours the A101 gladly posed for the famous group shots and like a ‘well oiled’ machine we ventured back to the Milestone Hotel in Gelibolu. On our last day of touring the A101 took in the ancient city of Troy, we spent free time in Canakkale (at yet another favourite watering hole The Han Cafe) As if the driver and I had conspired against the guide, he drove our bus and parked it again at the Boomerang. Another peaceful afternoon ensued!

A208 Group sadly only had the one opportunity but a great time was had by all. Mesut’s friendly hospitality not only to us but also to passing travellers involved having an Australian Iraqi veteran with serious alcohol issues who had made the place his home for two months. It was lucky we had some tough ex services guys that helped him off to bed (and that was just the girls!) We were lucky enough to have the local drunk and his horse and buggy roll up.

If you’re ever in the neighbourhood, or if you’re travelling with a local guide that has never heard of the place then make it a point to drop in and have a drink with Mesut and his rock-chewing German Shepherd Bonnie. It’s the best way to discuss your pilgrimage and will provide a lifelong appreciation of one of the great characters of ANZAC!

Oh and please say hi from Roachie! Should at least get you a freebie from Mesut. 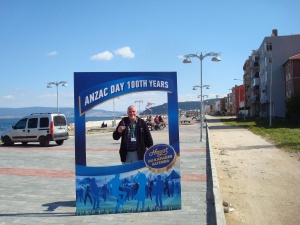 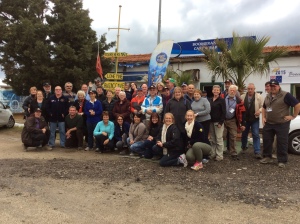 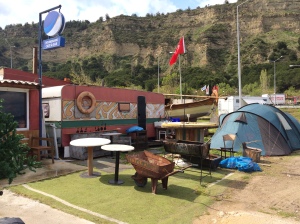 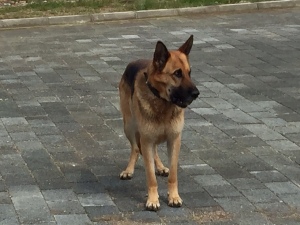 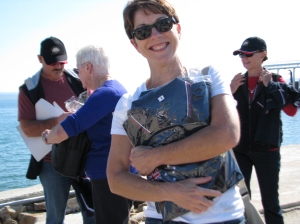 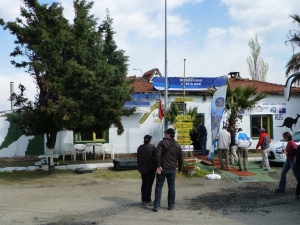